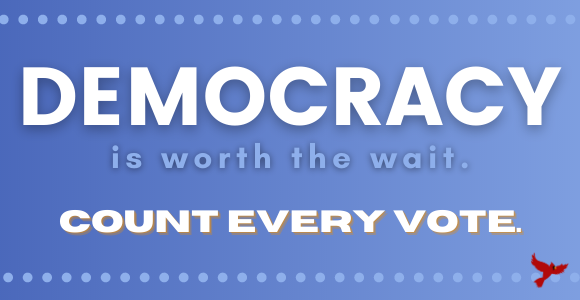 Votes are not being cast after election day, ballots are arriving. In North Carolina, folks voting by mail had to postmark their ballot by election day. Your local mailperson is busy delivering those ballots now.

This presidential election turned out more voters than any election ever before — that is something to be celebrated, not feared.

Spreading unsubstantiated rumors about voter fraud is dangerous and damaging to democracy. After the 2016 elections, Donald Trump convened a commission to investigate voter fraud after he claimed that between 2 and 5 million ballots were illegally cast. Trump disbanded that same commission in 2018 when no evidence of fraud was substantiated.

Here’s the truth: Americans across the country waited in often very long lines and risked their health to vote during a global pandemic. They participated in the democratic process, and their votes matter. Other people mailed in their ballots, perhaps because they were overseas serving in the military or perhaps because they are elderly and cannot risk going out– regardless of their reason, they are American citizens and their votes also matter. Many of the ballots “being found” are actually ballots arriving from US citizens living overseas. This happens every year.

Our democracy is strongest when every American—of every race, religion, gender identity, economic status, and sexual orientation—can make their voice heard. What we all do in this moment will matter for decades to come. Democracy done right should not be rushed. We need to be calm, patient, and count every vote because every vote counts.