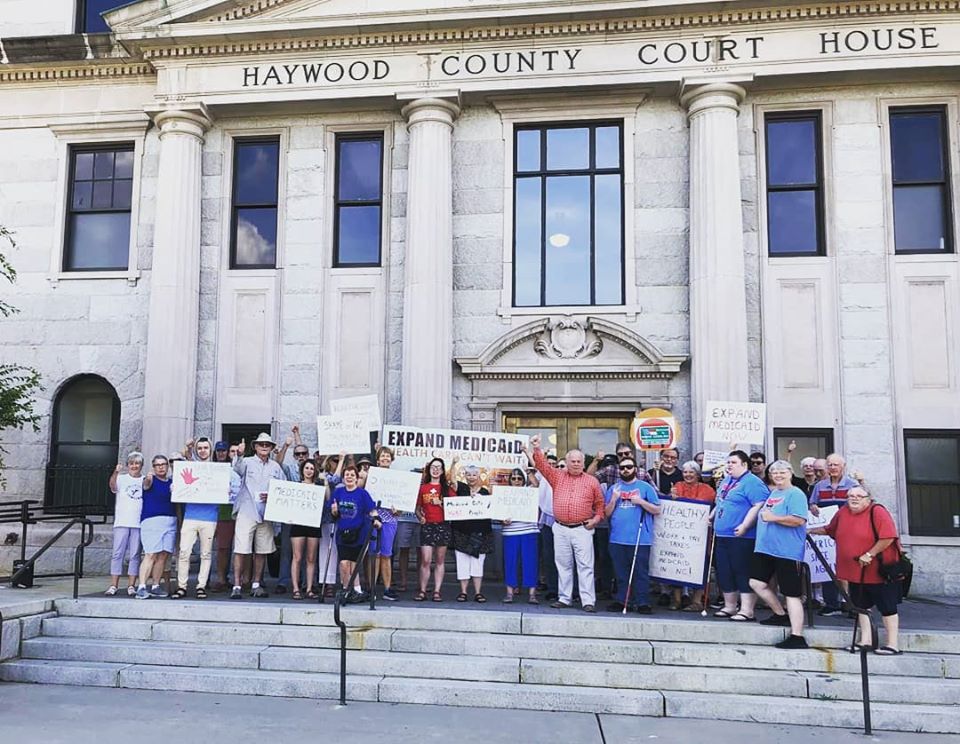 Waynesville Alderman Jon Feichter proposed that the Board of Aldermen call on the North Carolina General Assembly to pass Medicaid expansion, a move that would bring much-needed health coverage to people across the state, including many right here in Haywood County, who form the backbone of our economy and need access to health care and services. Feichter called for a town hall to hear from the working poor caught in the health insurance gap and from others who could speak to the proposal. Down Home NC’s Haywood Chapter mobilized to the event, with many members like Shuford speaking out.

“Down Home members have been passionately fighting to expand access to healthcare for over a year,” says Down Home organizer Chelsea White. “Our members are folks that are working multiple jobs, living with extreme medical conditions, and are being forsaken by the leaders of our state. This was the perfect chance to have our local leaders speak up with us and turn up the volume so that the folks in Raleigh don’t have a choice but to listen to us and do what is right.”

The Fight for Medicaid Expansion in North Carolina

In 2013, the NC General Assembly rejected Medicaid expansion– a move that has denied coverage to over 600,000 North Carolinians and hurt rural hospitals and health care providers. Rural communities have been particularly impacted by this decision, as places like Haywood County have higher rates of drug and alcohol use, suicide, injury, teen births, and preventable hospitalizations.

Down Home has been actively advocating for Medicaid expansion in Haywood and Jackson counties, holding public speak-outs, vigils, letter-writing campaigns, and even bird-dogging local political leaders last year. The hearing in Waynesville this week was packed with nearly 70 people, including a large group from Down Home, who overwhelmingly asked that the Aldermen support Medicaid expansion. At the end of the evening,  the Board of Aldermen did just that: The vote was unanimous to support House Bill 655.

The bipartisan support of this resolution speaks to the growing understanding of the incredible and pressing need for healthcare access for all North Carolina residents. However, we as a community must go further than this House Bill 655 and demand solutions that will work for rural areas like Haywood county.

The Problem with House Bill 655

House Bill 655 will not work for Haywood County or for North Carolina.

Promoting work requirements as a way of promoting financial independence ignores the fact that Medicaid coverage is what makes it possible for many low-income adults to work in the first place. Inserting work-requirements into the conversation around a successful, time-tested program appears to be a stalling tactic at best or coded, divisive politics at worst. Pushing work requirements shifts the blame to poor people for their lack of success, instead of looking at the structures and systems that have created the very real health care crisis we are facing as a society.

House Bill 655 was created off the false idea that Medicaid must be “fixed” before it can be expanded in North Carolina, despite Medicaid being regarded as one of the most reliable, outcomes-oriented government programs in existence.  Most concerning for rural communities like that of Haywood County, House Bill 655 creates a jumble of red tape and work requirements that will harm small town and rural working-class North Carolinians.

Adding work requirements to Medicaid is a non-sequitur: Medicaid IS a work support program.

“There is a perception that folks in the coverage gap aren’t working. But the truth is 6 out of 10 of those currently on Medicaid work — and those that don’t, are held back by caregiving, disabilities, or an inability to find full-time work,” Down Home member Amy Murphy-Nugen, a professor at Western Carolina University, explained at the Waynesville town hall. “Arkansas was one of the first states to implement work requirements, and within a year of implementing that change, 18,000 individuals found themselves removed from Medicaid because of their inability to meet the 80-hours per month required. Both Kentucky’s and Arkansas’ work requirements were rejected by a federal judge because it does not help citizens obtain healthcare, which is the purpose of Medicaid.”

The truth is, adding a work requirement doesn’t reflect what the economy is truly like for poor and working-class North Carolinians.

Meeting Medicaid work requirements will be especially difficult in rural economies because small towns and rural counties have higher unemployment rates and lower labor force participation. The counties where Down Home members live perhaps once had well-paying manufacturing jobs, but those careers have long since been replaced by jobs in the service sector. Low-paying and part-time jobs are usually unstable and the vast majority of low-income people who can secure steady employment, including those on Medicaid, already do work.  A clean Medicaid expansion bill without punitive work requirements could help to reverse this trend and introduce as many as 13,000 well-paying jobs to the rural North Carolina economy. That is the kind of positive and forward-thinking support our communities needs, instead of misguided clauses that are punitive in nature.

The industries in which many working-class and low-income folks work are characterized by fluctuating hours and very little flexibility, so through no fault of their own Medicaid beneficiaries may not be able to work the required number of hours every month. Requiring 80 hours of work a month puts at risk 46 percent of low-income working adults already receiving Medicaid because their employers are the ones who determine their hours week to week. Ask the next cashier who helps you through the line: Did they get the hours their family needed this week? Will they next week?

Even of those who work over 1,000 hours over the course of the year (which averages the 80-hour monthly requirement), 1 in 4 would be at risk of losing coverage for one or more months because they work seasonal jobs (in hospitality or farm work, for example) or are laid-off in between jobs (as is the case in many construction jobs). These are the blue-collar and working-class jobs that we, as a nation, once revered. Are we willing to leave these folks behind now?

At Down Home, we are working people and we know what it’s like to try to make ends meet in low wage work and in an upside-down economy.

When we started our organization, we went door to door in Waynesville and all over Haywood County to ask local folks what issues mattered to them most. Healthcare and wages were the two things that, door after door, conversation after conversation, came up. We know those issues are inextricably linked and that adding work requirements to Medicaid does nothing to move our communities to the future we need.

At Down Home, we support a “clean” Medicaid expansion– It is the easiest way to extend essential services to the North Carolina families that need it now.  We support HB 5/SB 2– Close the Medicaid Coverage Gap- which will expand affordable healthcare coverage to more than 500,000 North Carolinians, including more than 10,000 in Haywood, Jackson and Swain Counties. This bill provides help to people now and with no strings attached.

Passing HB 5/SB 2 would further the mission of Medicaid as it was intended: Helping people get the coverage and healthcare they need so they can be well and participate in our communities at their fullest. It is rural North Carolina that has the most to gain from this Medicaid bill. It will provide the critical medical resources to fight the opioid crisis, mental health issues, and other critical issues facing our community– including providing more than 200 living wage paying healthcare jobs in Haywood, Jackson and Swain Counties.

Work requirements don’t work. In 2020, Down Home is organizing for Medicaid expansion that will work for North Carolinians like ourselves and will provide our communities with the healthcare we deserve.

We know that working people are not to blame when they don’t have health insurance or don’t have steady work. It’s our job to reshift the focus back to the goal: Every parent, every grandparent, every child, every neighbor in all our communities, getting the care they need. No strings attached.