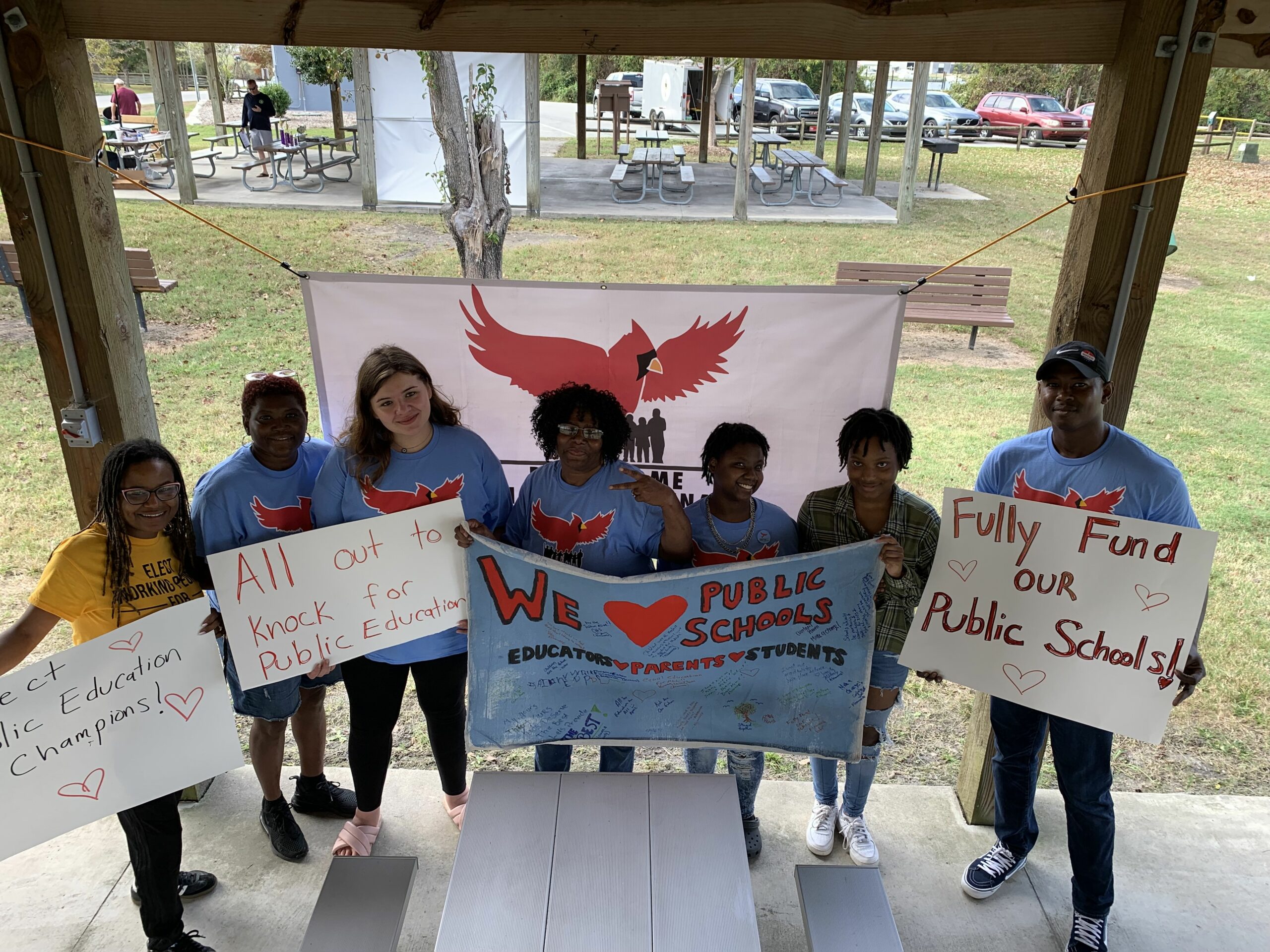 In the early days of the pandemic, public school teachers were praised as parents quickly found out how tough teaching is day in and day out. Hilarious memes circulated as parents were thrust into remote learning and everyone quickly agreed that no teacher is getting paid enough. Bus drivers and cafeteria workers kept students and families fed while we underwent the greatest public health disaster of our lifetimes. Public school workers were heroes.

We then witnessed a shift to a hyper focus on something being called “parents rights” in which public school parents were exhorted to “investigate” what their kids were learning in schools. As the story goes, parents watching in the background during remote learning were shocked to hear ways students were being “indoctrinated” about the racist history of the United States or that students were allowed to use preferred gender pronouns. For those of us that regularly attend local school board meetings there seemed to be a spontaneous surge across the nation of outraged speakers decrying so-called Critical Race Theory and accusing teachers of being pedophiles and groomers.

If the contrast between these two paragraphs feels like whiplash, just know you are not alone. The switch from a collective, in this together approach to meet student and family needs to the toxic, divisive approach disrupting school board meetings was not, in fact, spontaneous. It was part a now well documented right-wing extremist strategy to make public schools into a feared boogeyman and incite moral panic to drive people to the polls. As Trump’s former strategist Steve Bannon put it, “It’s going to go through the school boards.”

The problem is this fear driven rhetoric just doesn’t match with most people’s lived experience of their public schools. Our schools are places our communities connect around a common goal, a positive goal – educating our kids. We are working to build a team of public school parents, educators, students, and supporters capable of making positive changes for our public schools and creating structures for ongoing organizing at the local level with staying power.

Prior to the election we held listening events in 6 NC counties both rural and urban asking public school parents and educators what they want and need. We engaged hundreds of public ed stakeholders in in person listening events, Zoom calls, and surveys what we heard overwhelmingly that when people have complaints about public schools it’s that they want MORE of what public schools can offer. They want more nurses, more counselors, more high quality course options, more Black and Brown teachers, more arts and music programming. 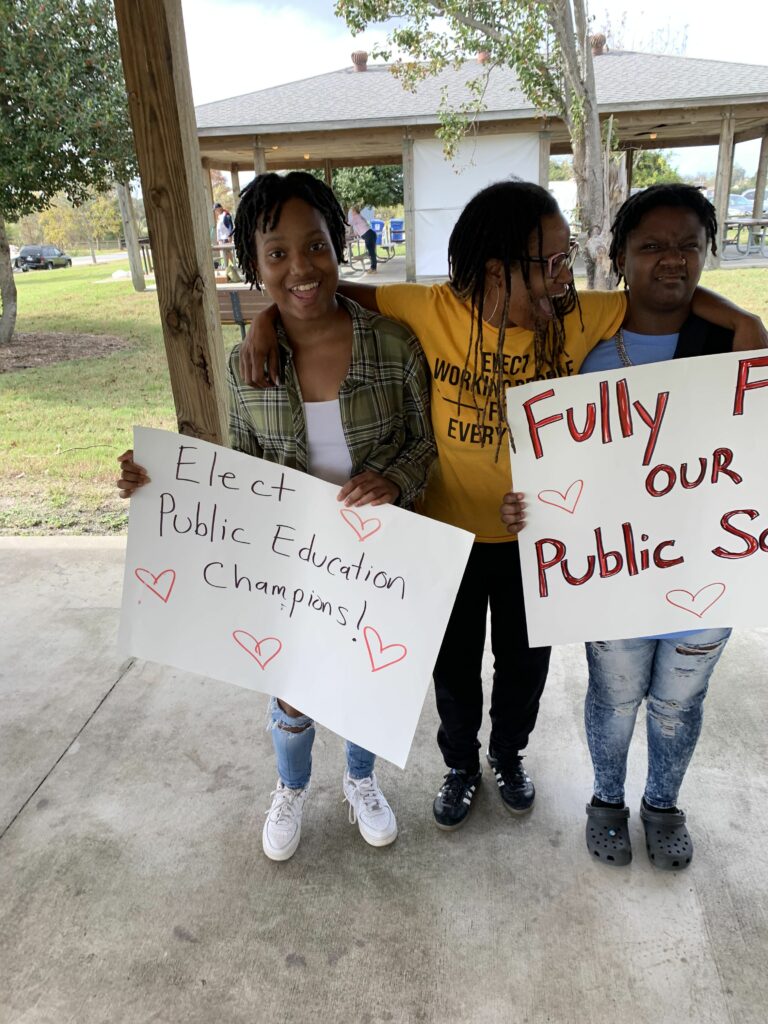 Despite all the culture war noise about Critical Race Theory and library books with transgender characters, public school parents want MORE of what multiracial public schools offer. When we talk to parents we confirm what we believe going in: people know what they want and need and they are growing tired of politically generated talking points telling them increasingly outlandish things about their child’s public that just doesn’t match their lived realities. Parents know that their kids aren’t getting pornography at school libraries. Parents know the difference between teaching about the history of racism and shaming white children. In short, parents see through the ruse and are growing increasingly weary of elected leaders that can’t seem to focus on the task at hand: fully funding our state’s public schools.

If the far-right’s strategy was to tap into people’s fear, our strategy at Down Home NC was to tap into people’s reliance on one another and that those of us who want fully funded schools are a majority. We trusted that if we go talk to people about the threats to our public schools and the the need to increase resources through this prolonged crisis, that they would agree and vote for public school champions and against fear mongering extremists.

We were right. Down Home knocked close to 130,000 doors across 8 rural counties. 6 of those counties had 10 school board races where our members made endorsements. We won 6 out of 10 of those school board races. The lesson? When we fight for what we believe in and have the courage to engage our neighbors in important discussions, we can win.

Our conversations helped make the stakes clear. We have a choice to make: we can either take the poison pill of racism and sign off on the culture war fight or we can have fully funded public schools, but we can’t have both. The only way we win public schools we all deserve is doing the hard work of talking to people across the state and continuing to organize the clear majorities of everyday people that rely on public schools.

Going forward we will continue this work helping to anchor the H.E.A.L. Together NC coalition alongside the Education Justice Alliance. This coalition is working statewide to identify and mobilize students, educators, and parents who believe that an honest, accurate and fully funded public education is the foundation for a just, multiracial democracy. This is a working coalition to help align like minded groups addressing urgent school board threats. The coalition provides a framework of engagement in order to create the beginnings of a long-term structure that recognizes public school issues are key to us building real majorities across rural and urban counties.

We need your voice in this work. Will you join us? You can start by taking this short survey on public school priorities, then on December 3 you can join us in Greensboro, NC for the NC Public School Summit where we will debrief what the the election means for NC public schools and begin planning for ways you can engage in your public school budget process as a first step in winning fully funded public school.

Sign up for the NC Public School Summit here