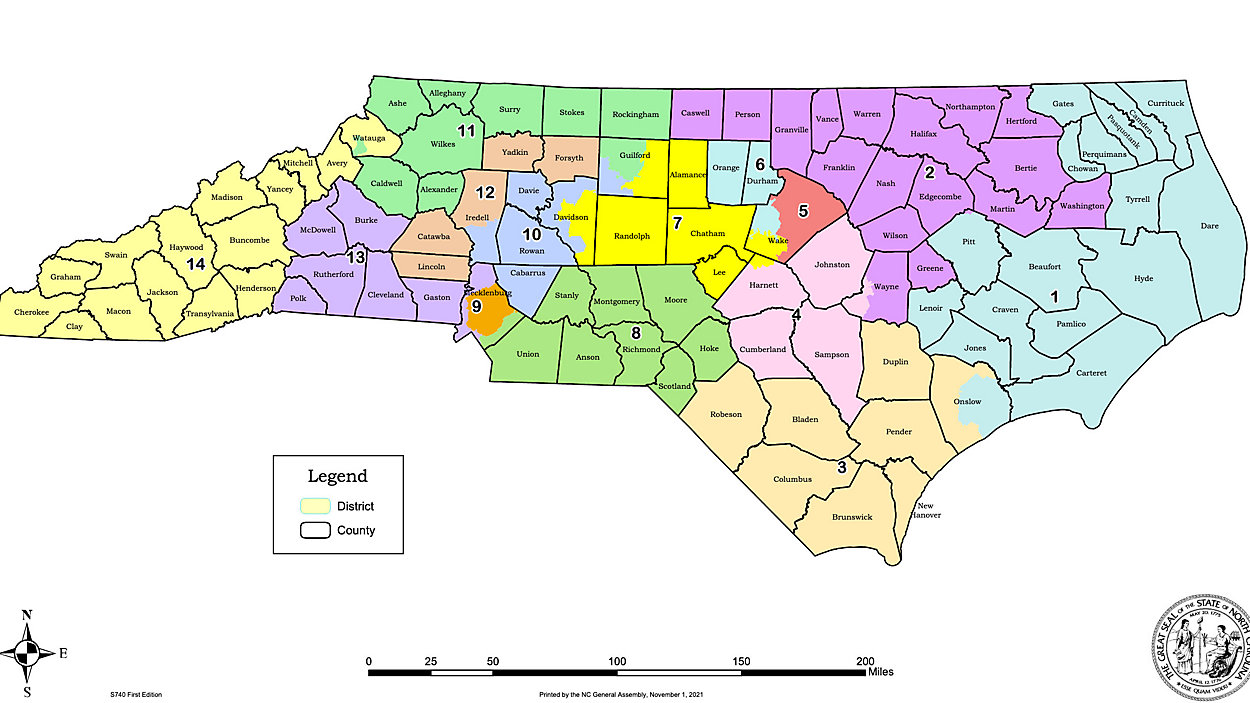 “It is easy to see by just looking at the new congressional map that our lawmakers have once again decided to choose their voters instead of letting North Carolinians have their voices heard. The new map will make it harder for our Congressional delegation in Washington to truly reflect the North Carolina that we all know: one that is multi racial, working class, and eager for a government that works for all of us. We will have an uphill fight next year but we refuse to concede to the gerrymandered lines drawn around us. We will and must organize and fight to win in 2022.” – Vicente Cortez, Down Home’s Field Director

Every ten years, after the census, North Carolina redraws our district maps. You can learn more about why and the process in our blog post here.

While the country was focused on our northern neighbors in Virginia during the elections this fall, using the elections as a bellwether for 2022, the Republican-controlled statehouse here in North Carolina passed new political maps that give the GOP a significant advantage in congressional elections for the next decade.

Ignoring significant input into the process and community needs, the committee passed maps that divide up our communities and strategically favor wins for their party.  State law does not allow the governor to veto the maps no matter the public outcry, which means they will be used in 2022 unless courts intervene.

Read our recent blog post about preparing for 2022 here.

While at Down Home we were watching the maps, so has been the nation. Because it is a “purple state,” North Carolina is one of the most competitive states in the nation. Trump only won our state with 49.9 percent in 2020.

The Princeton Gerrymandering Project gave our state an F– ranking our state’s maps at the bottom of the nation’s pile of very bad, gerrymandered maps. You can see how the Project makes use math to access maps and their ranking here.

For a decade, North Carolina has been under fire and scrutiny for the racially gerrymandered and unfair maps created by the last committee. The current maps appear to be just as biased. A lawsuit over the maps has already been filed.

Read here for an idea about how the courts might respond.

For a detailed look into why the maps are so unfair, click here.

What can we do?

Thank you to all our members and all the people in our communities who attended the hastily planned hearings. You didn’t have much notice to attend and many of you had to travel really far to get your voice heard. But you did it. Thank you.

Right now, the maps turn to the courts. You can follow organizations like the Southern Coalition for Social Justice and Common Cause for updates on the lawsuits filed. You can also follow Down Home’s social media accounts as we will try to share news.

But this isn’t the end of the road for your involvement. These maps are only a part of a larger strategy led by our state Republicans to harm our elections and our democracy. At Down Home, we believe that the best way to fight back against these anti-democratic principles is to enmesh ourselves into knowing all we can about democracy. The problem is: NO ONE TEACHES US THIS STUFF.

That’s why Down Home has a monthly educational series called The Democracy Series. These easy-to-read installments teach you the basics of engaging with your local and state government from how to speak out at local hearings to what you need to know about the local board of elections.