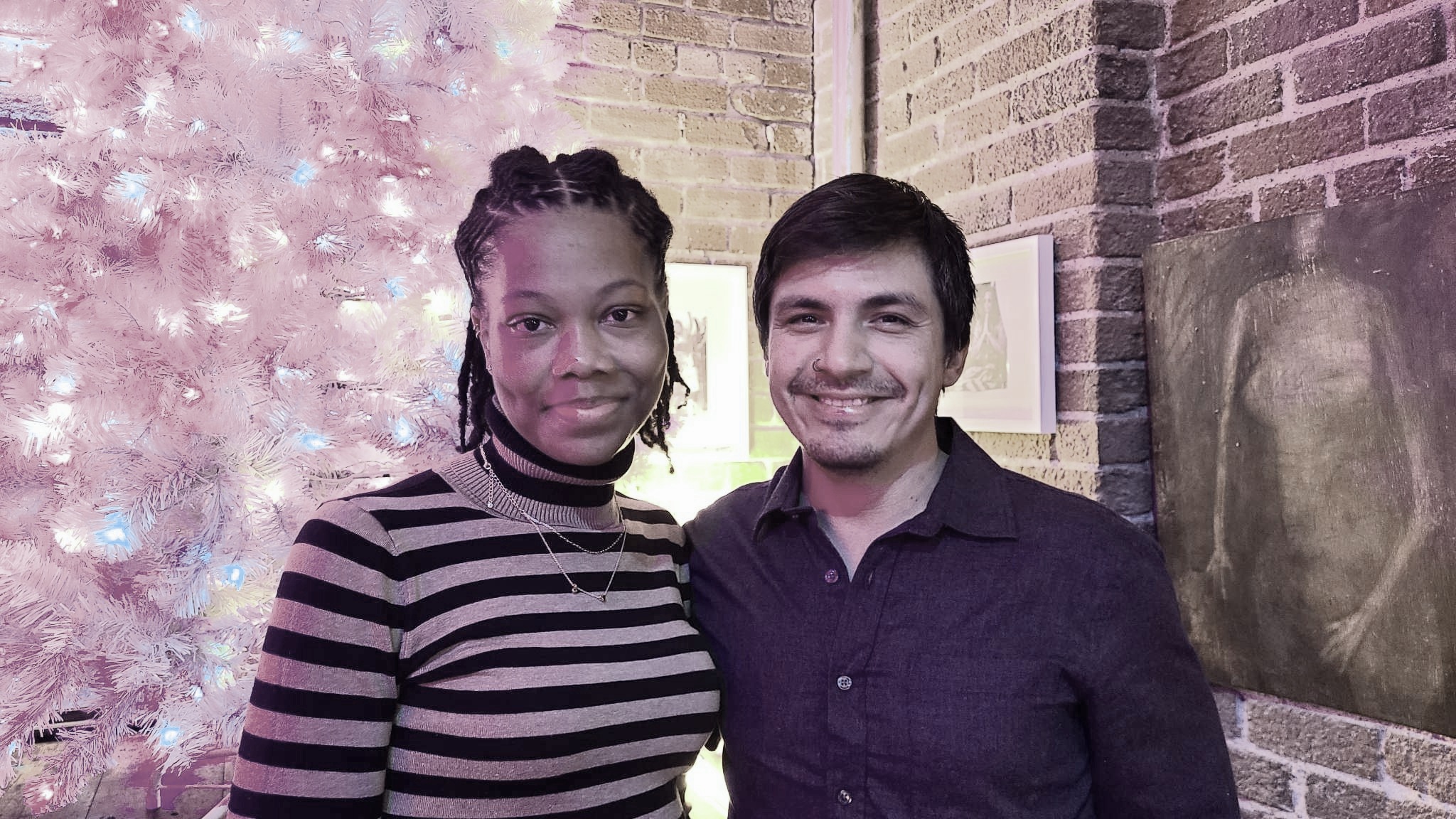 At a recent Johnston County chapter meeting, Shikara Fraser, a local Down Home member, interviewed Juan Miranda, our incoming Organizing Director. In addition to being an active member and helping canvass this last election season, Shikara helped Down Home screen and interview candidates for the Organizing Director position this fall. Below is a transcript of their conversation in Johnston County after Juan accepted the position.

Shikara: All right. The first question I want to ask you, I want to dig into your past a little bit. I want to know what experiences sparked your interest in becoming an organizer? I’m talking about  that first thing that was like, “this is what Juan’s going to do.”

Juan: Well, so for me, organizing has been about survival. I am an immigrant from Ecuador brought by my parents to this country when I was 10 years old. I didn’t know it then, but I didn’t have a piece of paper that I was going to need for the rest of my life. The fear of not knowing what to do once I graduated high school, not knowing what the future held and so many questions about how I was going to meet my needs, the needs of my family, the people around me.

Early on, I faced discrimination. I was arrested when I was 16 and spent a night in jail with so many folks who were there just for trying to survive and that just raised so many questions about the stories I was told of what this country was supposed to be and really made me question the way the system worked.

I faced deportation in my family, I saw my friends being torn away from their families and I thought: I don’t see no one else speaking for me or those around me, I have to do something, I have to speak up for myself but I didn’t want to do it by myself so I realized I’m going to have to bring a whole lot of people around me to speak together

So for me organizing has been about not wanting to be alone, not wanting to be afraid alone. You meet people and you learn that we all have different experiences, but they’re connected. Right? And while we might feel them differently and we might have a different version of that story, it’s the same system that tries to keep us down and divide us up so we cannot see each other. So I’m all about bringing people together so we can see each other, we can find those commonalities and we can fight together and build a new kind of world because we deserve so much more.

I was actually the first organizer at Down Home back in 2017. I helped start the Alamance Chapter, which was our first chapter. I recruited our first member there and later recruited Dreama Caldwell who today is now our co-director. That’s all to her credit, but I was lucky enough to be a small part of her process to grow her leadership and now we all get to benefit from her rich experience and vision.

I made the choice to go work with Siembra NC. At that time, where I was in life and especially the political environment, I felt important that I focused on working with the Latinx community, specifically with undocumented folks. After four years of super meaningful but draining work, I decided to take some time off. I spent 6 months resting, reflecting, exploring what I wanted to do moving forward. Later that summer, I spent a few months coaching some of our new organizers and spending a lot of time with some of our members across the state and was truly inspired by the amazing work happening and I thought, yep, this is where I want to be.

Shikara: Awesome. Thank you. So, you’ve been with Down Home since its inception in 2017. So I have to ask you, how has your relationship with Down Home and its leaders helped prepare you for this position?

Juan: Well, I know how much work it takes. It’s not just going into the community and assuming people are going to believe you. They have no reason to believe us, they have no reason to believe any organization. In many communities, organizations have come through and not always been truthful, they have taken advantage of people, they have talked down to people. So we’re trying to fight not just against our enemies, but also against just some of that history, the mistakes that we made in the past.

I think it’s about relationships. Something that I learned early on is that going to places where sometimes you’re not from or where people may look and think differently than you or have a different experience than you. It takes the slow, slow work of taking little chances, of getting to know people, of being vulnerable and sharing parts of yourself, which I think is hard. It goes counter to everything that we’re told about what we are supposed to do; Things like we have to be private with our story, that we should be distrustful, that we have to compete with each other and beat them if we want to get ahead.

Shikara: What do you think is the biggest challenge when you’re starting your new role here?

Juan: So I’ll name two. Organizationally, we know that we have to be big. Power is about having the numbers and being able to do many things at the same time. And we’re not used to being big. From communication, to decision making, to being able to plan long term and respond quickly, it’s all new to us and we are learning. It’s going to take some practice, and making mistakes, and having grace with each other but we are gonna have to learn how to move in big numbers and do different things at the same time together.

Secondly, we have to recognize that we have lost over and over again for many, many years and we can’t even imagine what winning looks like sometimes. I think that one of the biggest challenges for us is to have to help our folks feel confident enough that we can dream things and imagine that we can actually win. We need to dream big because that’s what’s going to motivate folks – just to know that there is so much more out there that we’ve been deprived from, but that we deserve it and that we are on only ones that can fight for and win it.

Shikara: Okay, thanks. So,  what are three new ideas will you bring to Down Home as the Organizing Director?

Juan: I think we got to have more fun and more lightness. More opportunities for us to come together and where we can bring all parts of ourselves.  We want to build a movement that its irresistible and for me that means more joy, more color, more beauty. So I definitely want to bring more of that.

I also want to see more political education and more leadership development. We want to have a clear path for people to take more leadership and more ownership of our work. We talk about being a member-led organization, but leadership takes responsibility and to take responsibility, people need to have the tools and the support so that they can feel empowered to lead. A lot of us have not been given many opportunities to do that in our lives so we want to make sure we prioritize that here.

And third, I think the third part is just more consistency. I know that we started a lot of our new chapters in the middle of an important election. Thankfully we were able to have a lot of precious victories, and y’all did some amazing work but I know it was rushed, it felt very hard and abrupt at times, and things often changed and popped up at the last minute. Sometimes we have to do that because we don’t always control the timeline. Thankfully, because of that incredible sacrifice y’all made, we now actually have a little time to slow down, reflect, learn from the past year, and move more intentionally moving forward. This upcoming year, we can actually take our time, deepen our skills and our knowledge.  Next year we are going to come back even stronger, wiser, and with the ability to plan ahead, and my plan is to make sure we maximize this opportunity.

Shikara: So, Down Home’s Mission is to give a voice to rural North Carolina. Why do you think multiracial organizing is important in the rural south?

Juan: Why multiracial organizing is important in the rural south? First things first, we have to organize everyone everywhere. Period. The assumption that big cities, and the west coast, and up north are inherently progressive is just untrue. With that said, we have historically failed small towns in rural communities,

I think the whole country, the whole world really depends on us being able to organize ourselves. Racism has been the main way in which we have been kept apart and separated. They have kept us divided for so many years. And if we’re not able to fix that, if we’re not able to come together here, the entire country’s in trouble. So when we talk about all the things that we face, it starts fixing this thing that we did not create, but we have to fix it because it’s our lives, it’s our futures, it’s our youth. It is the key thing.

Shikara: Okay. And I’m going to give you this last question. I’m torturing you.

Shikara: Is there anything else that you would want our members to know about you or what you are bringing to Down Home?

Juan: Yes. Y’all are it, the members are it. You guys. Yes, we have some resources at Down Home, some staff with fancy titles, some ideas of what things could look like, but none of that matters without each and every one of  you. I think it’s about people feeling ownership, shaping the vision, putting in the work, and making it happen. We can provide some help, we can provide some technical assistance, but at the end of the day, it’s the people who live here in rural North Carolina who have to name it, own it, shape it, and make it happen. We’re here to be side by side with you, but it has to be you all. That’s the only way we’re going to get there.