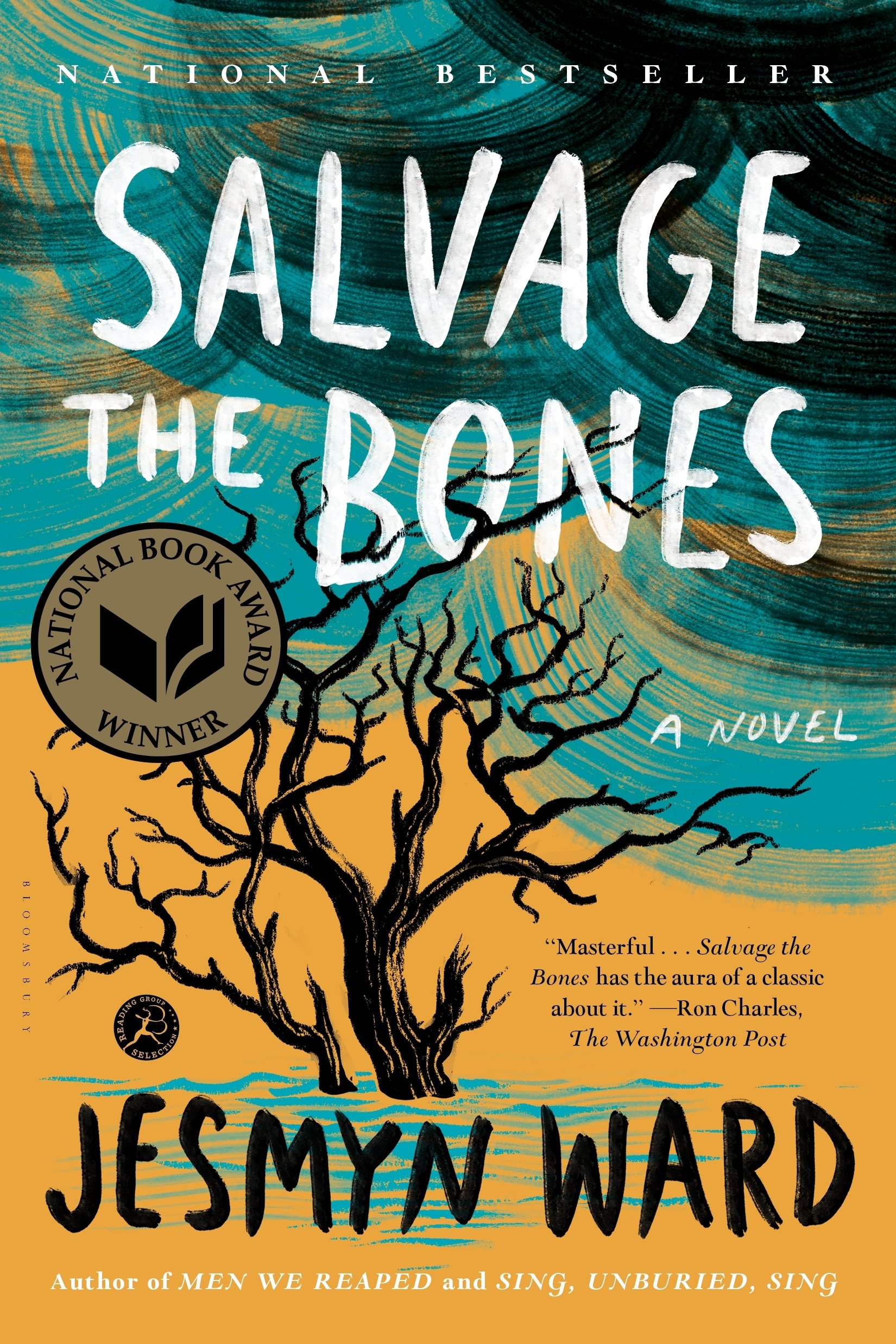 On Thursday, AP Literature teacher Holly Weaver had to defend her choice of teaching Salvage the Bones, a novel by Jesamyn Ward. Several parents at her Northern Guilford High School in Guilford County, N.C., questioned the novel’s artistic merit, calling it “garbage,” “trash,” and “pornography.” A large crowd of Weaver’s supporters showed up to defend her teaching and the need to tackle difficult and diverse topics.

What follows is Holly Weaver’s defense of teaching Salvage the Bones and why it benefits students.

About Salvage the Bones by Jesamyn Ward

Salvage the Bones is a powerful story about family, loyalty, and survival.

As Hurricane Katrina makes its way to the town of Bois Sauvage, Mississippi, Esch and her family must salvage everything they can to prepare for the storm.

Meanwhile, each family member fights their own battles, Randall on the basketball court, Skeetah fighting his prized pit-bull, Daddy dealing with the loss of his wife and being a single parent, and finally, Esch, who is fifteen and pregnant.

This is a novel about weathering through life’s literal and metaphorical storms.

I selected this novel for AP Literature for several reasons.

First, Salvage the Bones is endorsed by multiple curriculum specialists whose entire job is to select effective teaching material to ensure we are meeting the course skills.

Ward’s novel is included on the list of novels for Unit 5: Home & Family in our GCS AP Literature textbook.

The innovative narrative voice and deeply complex characters makes this novel a great selection for teaching the course skills outlined in the AP Literature Course and Exam Description.

In other words, this novel lends itself well to the course skills. 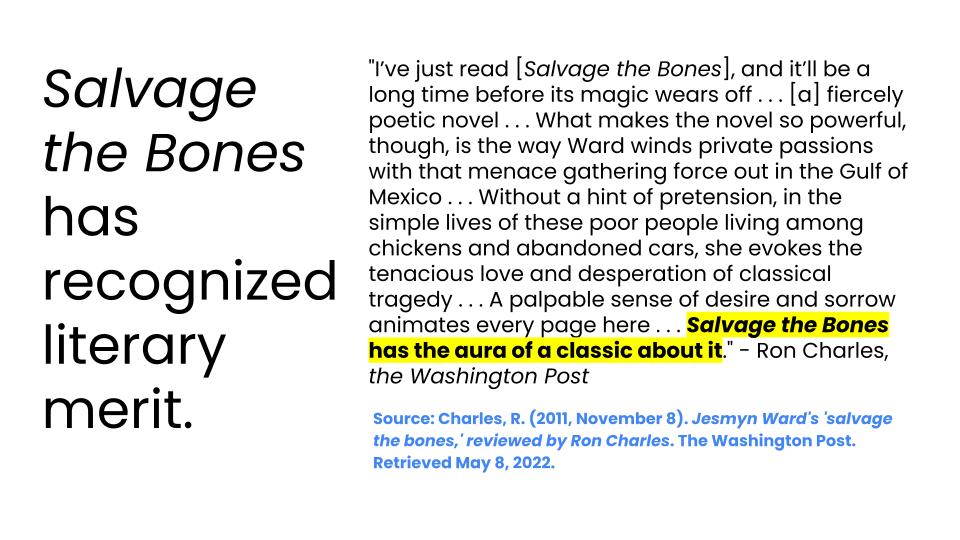 These curriculum specialists likely selected Salvage the Bones because it has recognized literary merit.

To prepare students for their AP Exam, we select a wide range of novels with multiple themes, nuanced symbols, and complex characters.

With contemporary prose making up the free response section on the AP exam for two years in a row, it’s crucial to read modern texts with literary merit. 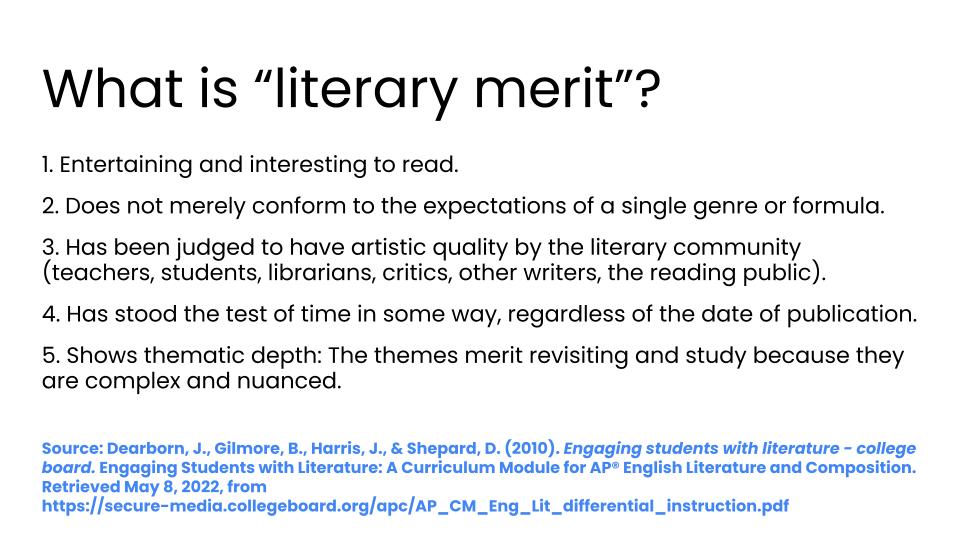 So what is “literary merit”? According to the College Board, there are 10 characteristics of a novel with literary value.

Salvage the Bones meets all of these characteristics.

First, this book is of high interest to teens; many students from last two years told me this was one of their favorite books we read. 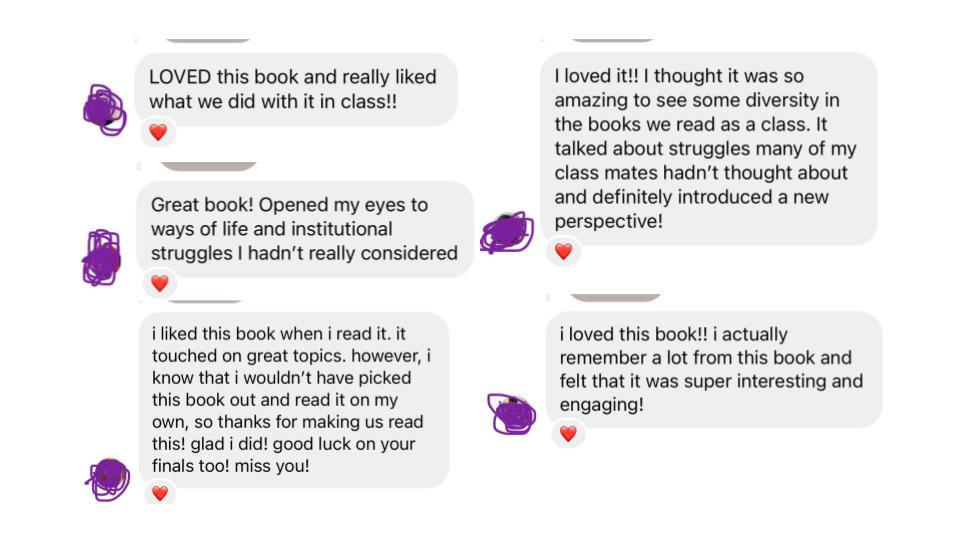 Here are a few messages from my former students about this novel. As you can see, they found it to be highly relevant and interesting.

Salvage the Bones does not conform to the expectations of a single genre or formula. Parul Sehgal from The New York Times writes, “It feels fresh and urgent, but it’s an ancient, archetypal tale.”

The novel has been judged to have artistic quality by the literary community by winning the 2011 National Book Award for Fiction, one of the highest honors for a contemporary author.

One artistic quality we focus on is Ward’s use of symbolism throughout the novel. From China the dog to Hurricane Katrina, this book is dripping with motifs that further the theme.

This novel contains themes that will always be relevant. Teenagers will have to navigate their world, and yes, that world does involve uncomfortable topics like statutory rape and teenage pregancy. However, this book also shows the timeless themes of family loyalty and resilience.

Moreover, the themes in this work are incredibly nuanced and complex. Skeetah’s character is just one example of this. Throughout the book, we are morally opposed to him fighting his dog, China, yet we are touched by the way he fiercely protects her and his family. Learning how to wrestle with our feelings towards complex characters is an important life skill and something good literature can evoke. 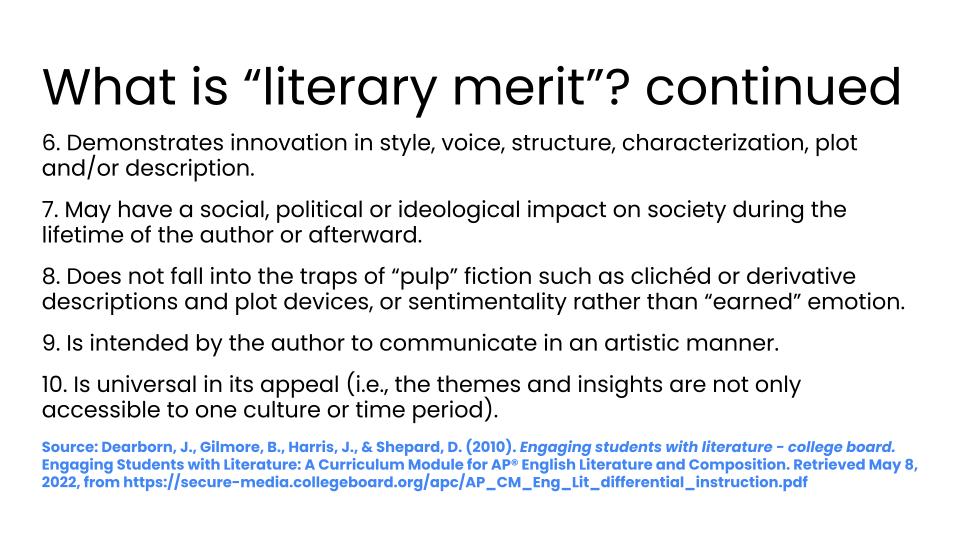 Considering the social impact on society that this book has made, when asked why she wrote Salvage the Bones, Jesmyn Ward notes her desire to not let Hurricane Katrina fade away from the public consciousness.

She says, “I realized that if I was going to assume the responsibility of writing about my home, I needed narrative ruthlessness. I couldn’t dull the edges and fall in love with my characters and spare them. Life does not spare us.”

Thank goodness reading allows us to walk in someone else’s shoes, even if only for a few hundred pages. 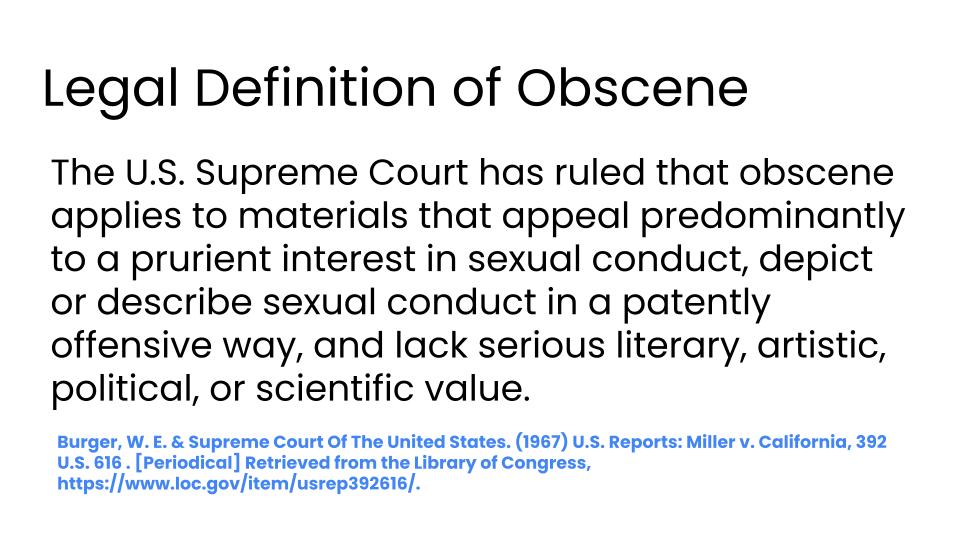 I have heard the word “obscene” be used to describe this novel so I thought it would be important for us to look at the legal definition of the word.

While the graphic scenes read here today are certainly uncomfortable, these scenes are by no means supposed to suggest arousal.

The advanced reader knows these scenes serve to characterize Esch as she finds her strength against Manny’s abuse. My AP students who read this book know this and made it very clear in their essays they are capable of such critical thinking.

Silencing this book would be silencing the voice of a young, teenage girl who learned to stick up for herself.

So, no, this is not appealing predominantly to an interest in sexual content whatsoever.

Therefore, this book is not obscene. 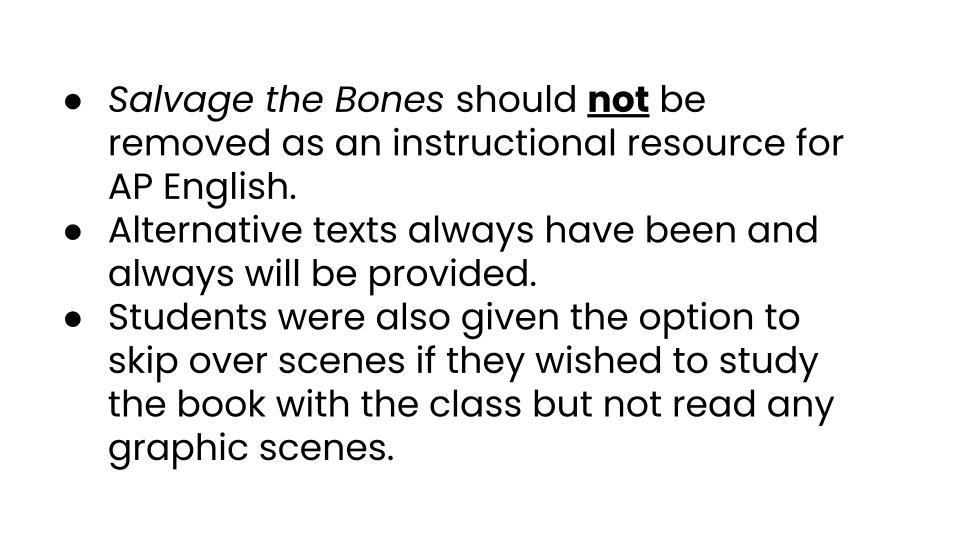 Parents should be a part of their child’s education and speak up if they are uncomfortable with their child reading a book. That is their right and that is why alternatives were given.

A parent certainly has the right to request that their child does not read a book, but they do not have the right to say they don’t want anyone else’s child to read that book.

Therefore, I urge you to keep this book as a teaching resource.

I was very clear with students about the content of this novel and offered several alternatives. I also offered students the option to skip over specific passages if they wanted to keep the same novel. 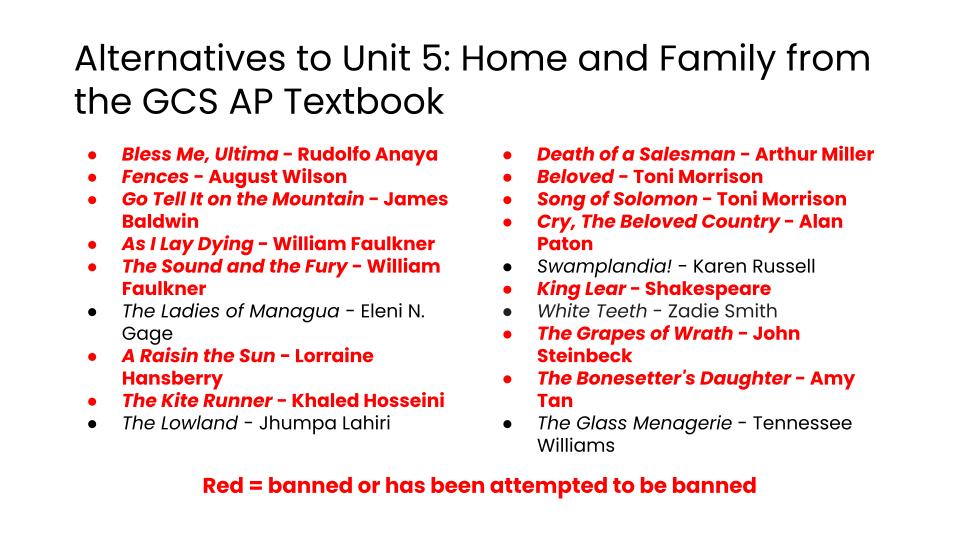 I’ve also heard that there were plenty of alternatives to choose from.

Censorship in AP Literature is not new.

Yes, even Shakespeare was labeled “trash” or “obscene” in his day. 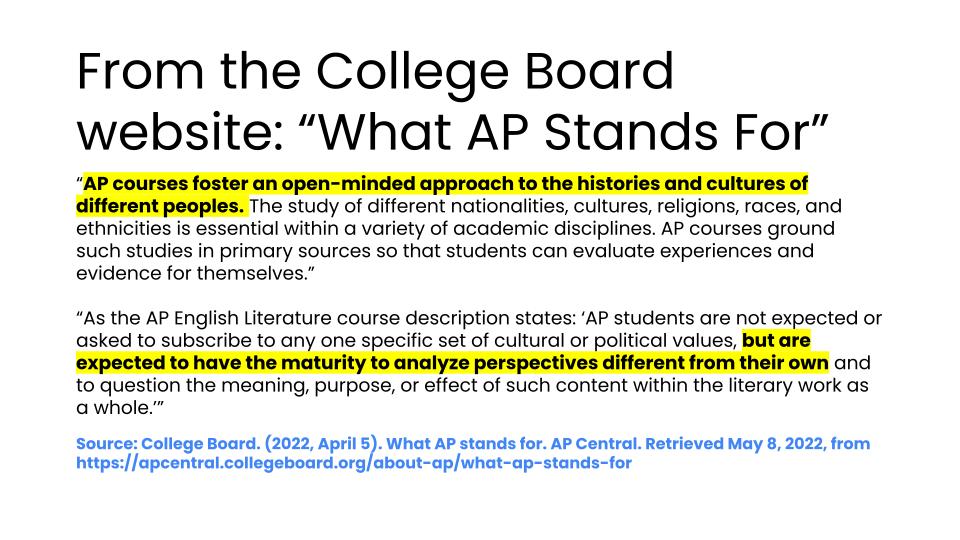 In light of the current national trends, College Board AP released 7 principles to inform parents and students of what they stand for.

They believe the goal for college-level classes is for students to intellectually explore “different nationalities, cultures, religions, races, and ethnicities…within a variety of academic disciplines.”

We cannot pick and choose the parts of histories and cultures within our comfort zones. Imagine how empty these shelves would be.

[Note: Weaver’s final slide was a personal video message from author Jesamyn Ward in defense of the book.]