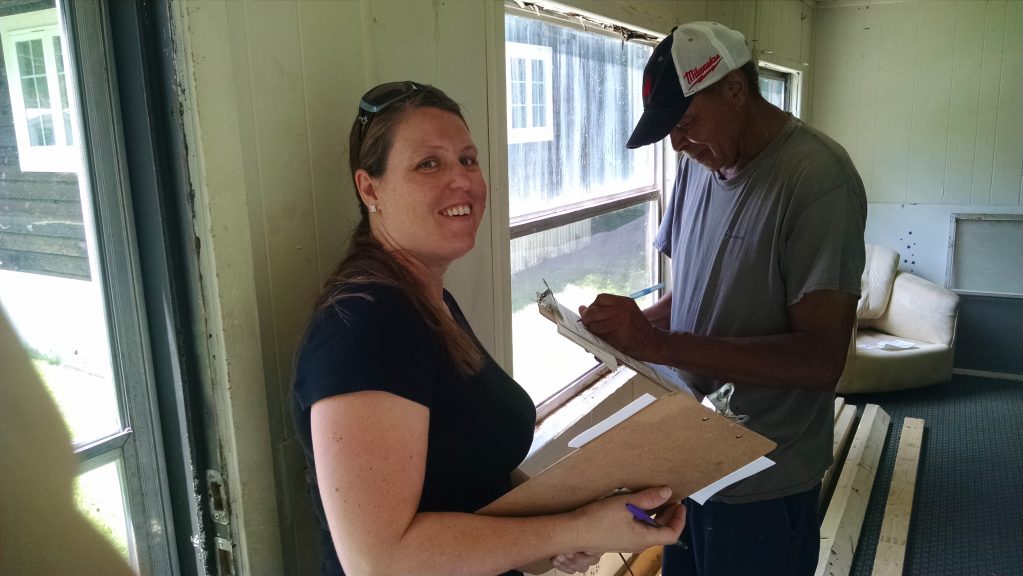 Admittedly, the conversation starts off a little choppy. After all, a stranger has called out of the blue. After a few pleasantries, the stranger starts asking about how involved the government should be in the economic recovery. Should the government be doing more for working people? For jobs? For the economy? The woman on the line answers hesitantly.

Fifteen minutes later, however, a dialogue is emerging. The caller– a member of Down Home’s Deep Canvassing Team– is sharing about her own anxiety during the early days of the  pandemic when she pieced together jobs into a near 80 hour work week to cover her basic needs. The woman on the line was empathetic, but uncertain about how much she wanted to see the government involved in her day to day life. But soon she reveals that she is concerned about her daughter who can’t get on Medicaid but needs to go to the doctor fairly regularly. “This situation could bankrupt her,” she says. Together, the caller and the woman agree that if the North Carolina General Assembly would pass Medicaid expansion then not only would the woman’s daughter’s life be better, but her community would feel safer, more secure.

Calling strangers and asking them to talk about politics doesn’t sound like it would work, but this is exactly what Down Home’s Deep Canvassing team has been doing thousands of times over this year– with proven results.

There’s a stereotype about rural folks being suspicious of outsiders and our deep canvassers are proving it wrong. Tabatha Davis, a Down Home member and deep canvasser who lives out in the country herself, says that the further out she goes to knock on a door, the more eager people seem to be to talk. “You just have to show them you aren’t trying to sell them something or get them to do anything,” she says. “You can show them that you are there to listen because you are a lot like them and care.”

Neko Schmidt makes deep canvassing calls from his basement that doubles as his art studio. Sometimes his kids join him, keeping him company as he works. “Sure some folks just hang up on you,” he explains. “But on a good night you will get three or four really good conversations where you feel like the person is really heard.”

“Often you will talk to someone who doesn’t think their opinion matters because they are not educated about politics or they don’t see themselves particularly interested in politics. Once you tell them these politics impact them and by that fact alone their opinion matters, they start to open up.”

“It helps that I’m actually very curious,” he adds.

This sentiment is echoed by everyone on the Down Home Deep Canvassing team. Each seems eager to share that they do this work to impact political change, but also are open to how the work can and does change them. When this curiosity and openness comes across in the conversation, it can be transformative.

Elena Peterson, another member of the team, shares a recent conversation she had with a nurse in a long term care facility who was against vaccine mandates and hadn’t gotten vaccinated herself. She was looking at being fired over this choice.

“In a non-deep canvassing context, I might have thrown my hands up and said I don’t know how to have a conversation about this!” admits Elena. But instead she shared about her own mother who works in healthcare and feels overburdened and not listened to. “This really resonated [with her] and she talked about how much she cared about her job and the relationships she had there.”

“A lot of her hesitancy around the vaccine was based in her sense that she felt abandoned by the government during the course of the pandemic and that she felt she was giving so much with no support at all,” explains Elena. “The vaccine was one more example of higher ups making things scarier and more difficult for her.”

“I thought vaccines would be this impenetrable thing we couldn’t talk through, but it wasn’t. [I told her that] to me government works best when it’s a reflection of the people it serves, and this really resonated with her. No new facts were shared, there was no groundbreaking, no lightbulb – but we did reorient over this conversation.”

Foundational to deep canvassing is the sharing of stories. Down Home’s team is quick to offer themselves into the conversation, with a personal story or a story about their family.

Neko explains that you can also create deep connections over shared material needs and interests. “My best conversations are with people who aren’t politically aligned with me but are economically aligned with me. I talk to people who support Trump and when they bring him up, I say, look, we can probably both agree that no one gives a sh** about those of us who live paycheck to paycheck.”

“If they are actual working class people it’s easy to find connections over class because no one loves a millionaire or thinks they actually care about us.”

“Sometimes people will want to know what political party you belong to and we say that’s not what we are doing,” says Tabatha. The experience of our team members is that partisan politics often come up immediately, but by digging in the polarized talking points tend to dissolve after a few minutes. The trick is asking about people’s needs, they explain.

Elena says that she has done important canvassing before for political candidates she believed in. “I felt good about knocking on doors and getting out the vote for these people. But it felt really unresolved. People I spoke to had so many issues going on in their life and had deeper questions.”

“The meat of those conversations lay elsewhere,” she says. “Deep canvassing allows you to cast your gaze into that.”

Southerners are talkers. Sure, that’s another stereotype but it does feel universally true. We greet strangers, we fill up the quiet places with our voices, we ask everyone about how their mama is.

“Southerners are big chatters,” Elena observes. “We have a cultural orientation towards conversation and a willingness to let someone say what they need to say. It’s classically southern.” She says that this helps when she is making a phone call; people are likely to hear her out and if she is given that time she can express some curiosity and compassion to set the tone.

“In the South, we talk all the time but not often about something of substance,” says Neko. “That’s certainly true in Yadkin County where I am from. We talk but talk in circles. We don’t like to offend people or have trouble, so you pretend that certain things aren’t happening. So I think people aren’t used to direct questions like we do in deep canvassing– and I guess they appreciate it.”

Tabatha agrees that people seem hungry to just be asked their opinions instead of talking around issues or defaulting to polarized talking points. “People are eager to connect in a meaningful way. They know their opinion matters and they have good ideas about what needs to change but, especially deeper out in the country, no one has acted like it does. We do.”

Whether it’s phone banking and texting your neighbors, hosting events, or having deep conversations about poor & working-class power in rural North Carolina- plugging in a little (or a lot!) is a big help. Sign up below to volunteer!