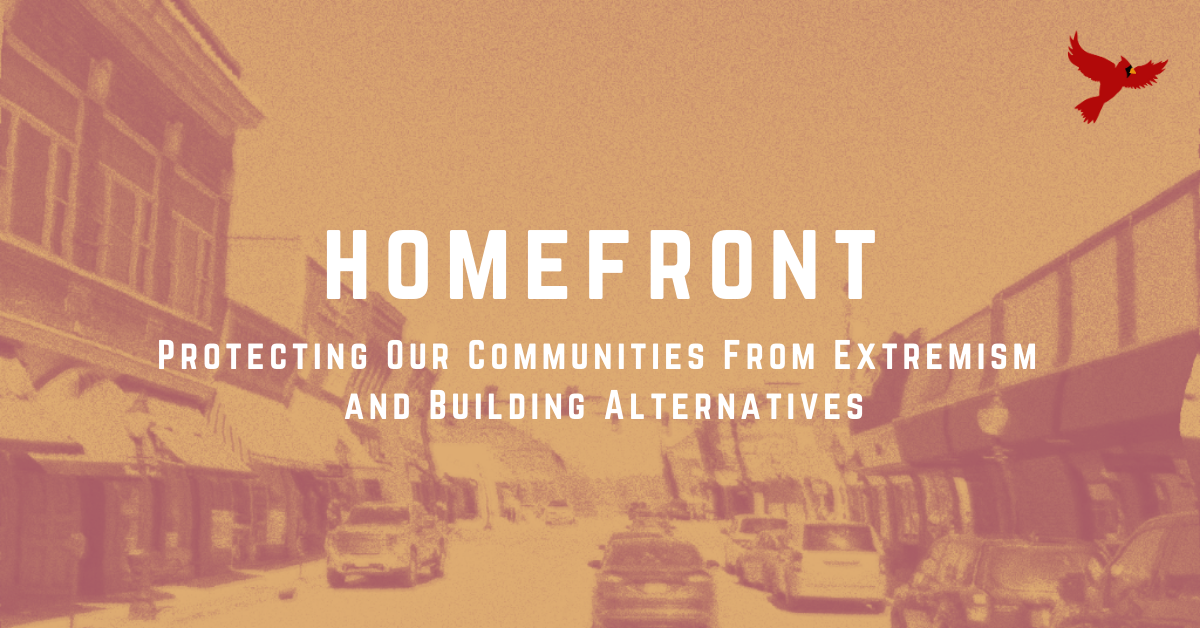 Last summer one of our member-organizers in Jackson County, North Carolina, sent us a text. It read: There are men with guns here.

She– like so many of us across the country– was at a Black Lives Matter march in her hometown. All across North Carolina the residents of small towns had poured into the streets to express their outrage over the murder of George Floyd and to demand action. But in Jackson County, an armed militia had shown up to “defend” the town and was parading, unchecked, through the quiet mountain town of Sylva with flack jackets, tactical gear, and high-powered weaponry.

Far right extremists showed up over and over across rural North Carolina in 2020, often armed. A man tried to drive a front-end loader into a crowd of protestors in Pittsboro while another man was arrested for doing the same with a car in Elkin. Confederate flag-waving protestors, many with known affiliation to hate groups, are a regular feature on the courthouse square in Graham. Weekend after weekend, mobs of angry, screaming counter protestors confronted Black Lives Matter marches and vigils in Maggie Valey, Gastonia, Lexington, and beyond.

It’s easy to cast off these incidents off as unfortunate relics of North Carolina’s yesteryear and imagine the more serious incidents as merely disgruntled lone wolves. But in actuality these individuals and groups are organized and actively organizing in our communities. For example, we know that one of the men who shot at Black protestors in Salisbury last summer has connections to a neo-Confederate biker group and shares hate material on his social media. We know that armed Boogaloo accelerationists — men who wish to sow havoc and bring the next civil war- have shown up from Fayetteville to Greensboro, Asheboro to Ashville over the last year, and that one has been arrested for conspiring with Hamas.

After the January 6th attack on the Capital, it appears that our country may be more prepared and inclined to take the threat of white nationalism and far-right extremism seriously. However, because of the sometimes close relationships between local law enforcement and far-right organizing in our communities, we remain concerned locally. Many of the North Carolina residents who have been arrested in connection for the riot at the Capital are individuals already known to us — they have been harassing and threatened people in our communities for years.

We know that our community’s safety is at stake. Our members, our staff, and even local candidates we support have been harassed, doxxed, and threatened. Here in North Carolina, the threat to democracy and to community safety doesn’t feel theoretical– it feels all too real.

We also know that our movements are at stake. So many of these far-right groups are targeting poor and working class folks with a dangerous and racist ideology. We believe that we have a responsibility to not just oppose the snake oil they are selling, but to intervene and create real multiracial alternatives that will work for all of us.

This is why Down Home has created Homefront: Protecting our communities from extremism and building welcoming alternatives. Our Homefront series is a place where we can learn together about far-right extremism in North Carolina while coming together around solutions.

For too long, our small towns and rural communities have been left behind. Good jobs and fair wages have left; community supports such as rural hospitals, rehabilitation clinics, and psychiatric care have closed or been defunded; even our children feel they must leave for better educations and opportunities. Concurrent with these problems, our small towns have been abandoned by mainstream political parties. This has created a vacuum that the far-right has been more than happy to fill.

Down Home has always seen ourselves as a clear and viable alternative to this toxic extremism for poor and working people across race. We know that building multiracial coalitions is the only solution and is what will bring about the change we need. However, to do this work, we have to know what it is that we are up against.

We hope you will join us in this conversation by signing up for our Homefront teach-in series. During this four part series, you will learn about what is happening in far-right organizing in North Carolina, about how these groups target and recruit people in our hometowns, how we can fight against disinformation, and how we can help people who have been swept up in conspiracy theories.

Find the dates and times for our Homefront teach-ins below.

How Extremists Recruit and What We Can Do About It

Conspiracy theories, fake news, and how to help our communities.