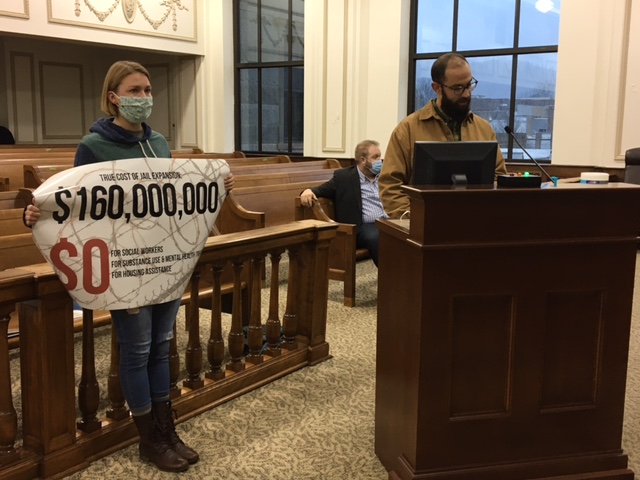 This past Monday,  Down Home Haywood members and other local community members presented a “People’s Budget” to the Haywood County Commissioners at their monthly board meeting.

Down Home Haywood members live here and we are invested here: We know what the people around us need, we know what will make our communities thrive, and we want our County budget to reflect those needs and values. Since its first proposal, we have been vocal in our opposition to the planned $16.5 million dollar jail expansion in the county, citing it as misappropriation of our tax dollars.  The alternative budget that we created demonstrates how the County could best use taxpayer dollars to decrease incarceration and instead support the health and wellbeing of the community at large.

Those presenting the People’s Budget demonstrated that the County could use less money to greater impact by reallocating these funds.

“Instead of $16.5 million dollars allotted to build a new jail, why not choose life over punishment?” asked Victoria Castle of Haywood County. “We propose allocating only $1.8 million to provide mental health and substance abuse treatment and prevention, $1.5 million to housing assistance, and just over $73,000 for CIT training for our law enforcement.”

Other speakers at the meeting voiced concern about the high price of the jail expansion and encouraged Commissioners to pursue the alternatives in the People’s Budget. Peter Constantian, a local pastor, presented a visual display to the Commissioners showing the estimated full cost of the project. “The true cost of the jail expansion is not contained in the $16.4 million dollars that has been projected. Instead, we project that the true cost will be closer to ten times that amount,” he explained. “Our research has shown that the major cost of bigger jails is not the physical structure itself, but the cost of employing additional corrections officers and providing medical care to those who are detained.”

“But the cost I’m most concerned about is the moral cost,” continued Constantian. “How would Jesus spend $16 million dollars in Haywood County? The decision to triple our jail capacity is not simply a budgetary issue. Rather, it reflects our expectations and goals as a county. I am begging you to consider spending the money differently.”

The $3.36 million alternative People’s Budget focuses on prevention as both a humane and cost-effective strategy to decrease incarceration in Haywood County. Line items include funding for Licensed Clinical Social Workers to be placed in all middle and high schools, financial investment into existing residential treatment/therapy programs, and nearly $1.5 million to be invested into affordable housing locally. In other words, our proposal includes things that Haywood County actually needs.

Speakers presenting the People’s Budget asked for our County Commissioners to commit to meeting with representatives of Down Home Haywood and community members to learn more about the proposal and to work towards a budget that reflects the hope and values that local people have for their community.

The People’s Budget is a part of Down Home Haywood’s ongoing  “NO NEW JAIL!” campaign. Want to get involved in our work? Contact Jesse-Lee Dunlap at [email protected]