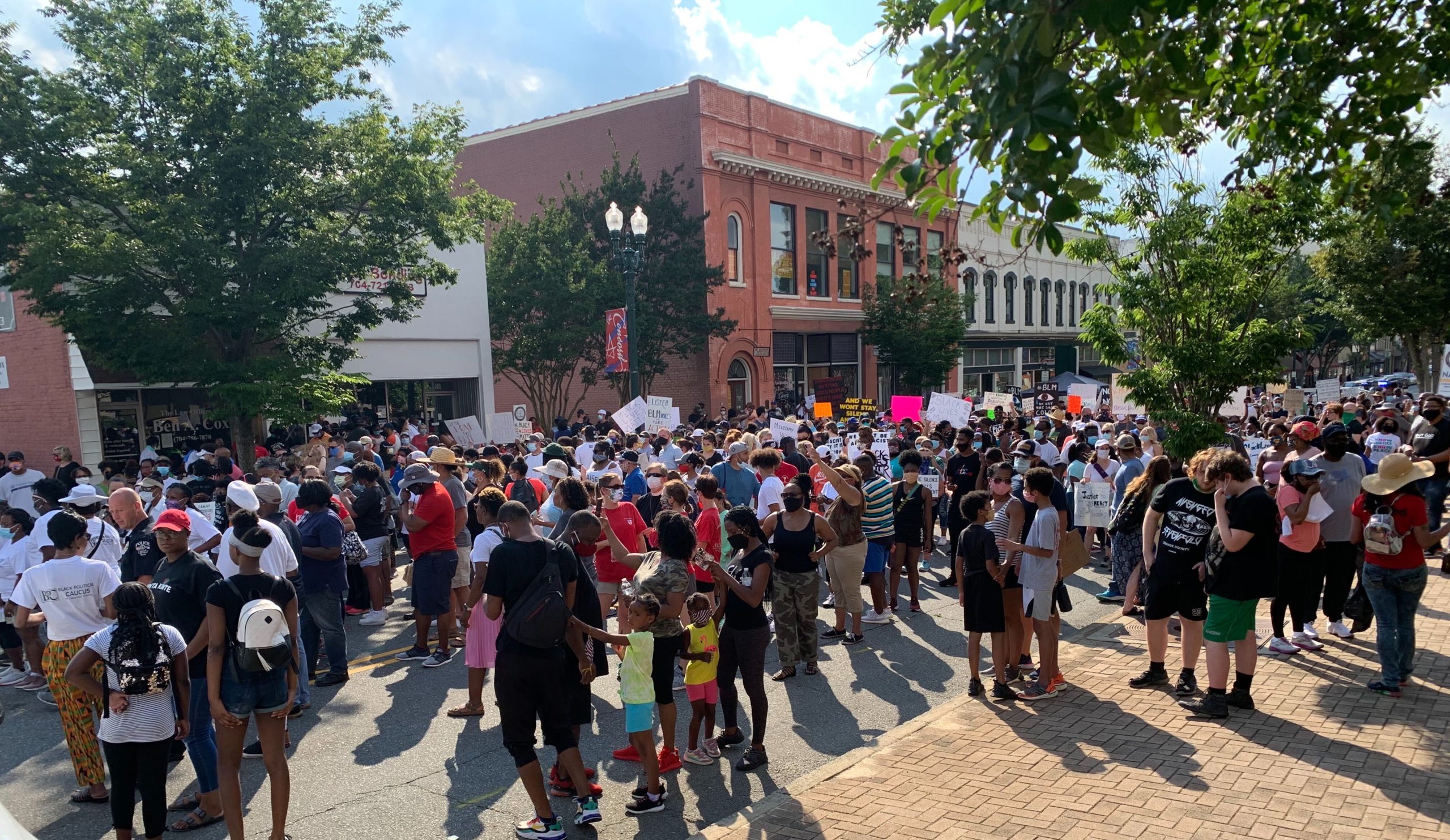 “You are an organizer.”

That’s what Jasmine Wright found herself telling an elderly woman at a food pantry in Cabarrus County. The woman wasn’t so sure.

But Jasmine was sure of it. Absolutely sure. The woman had just shared that at one point in time the US mail wasn’t being delivered in the Logan Community, Concord’s historically Black neighborhood due to “fear.” The woman was born and raised in the neighborhood and was bringing up her own family there: She needed her mail. So, she rallied her neighbors together and brought their demands to the city. Together, they were able to pressure the postal service to comply and soon the neighborhood was getting it’s mail.

“When I told her about the work that Down Home wants to do in the county, she was hesitant and said she didn’t believe that regular people can make change,” says Jasmine, “but I reminded her that her own story about the mail proves we can.”

In early 2020, organizers from Down Home North Carolina set out to ask local residents a simple question: What changes do you want to see in Cabarrus County?

What we found out through these conversations on people’s front porches and in their living rooms was that the way things have been for poor and working folks here is simply not working.

We found out that rent is unaffordable for nearly half of the people living here (44.1%), with nearly one in five residents spending more than half their incomes on housing (leaving the rest to cover ALL their other expenses, including food, healthcare, transportation and childcare). In fact, we learned that wages are so low that the median hourly wage in Cabarrus only covers about 66% of what a parent raising two children would need to cover their most basic needs.

Over and over again, the individuals and families we spoke to said that affordable healthcare was out of their reach. Even before COVID-19 related layoffs occured, nearly one in ten Cabarrus residents had no health coverage, and others that did have coverage, including many seniors and families with small children, still could not afford their prescriptions or a simple trip to the doctor.

As we canvassed the county, the significance of these healthcare gaps grew. To keep each other safe during COVID-19, we moved our conversations with our neighbors to the phones and the people we spoke to on the other end were saying they were fearful of the spreading virus and that without adequate healthcare access, they had no idea what they would do if they got sick.

These realities break our heart, but more than that, they call us to action. If we love these towns and these neighbors then we have to fight for them. We have to make this a place that everyone can call home.

For many of us, COVID-19 drew our attention back to the structural disparities and ethical shortcomings that have limited our individual and collective potential. COVID-19 has also reminded us of how deeply connected we are. How can any one of us be healthy if essential workers, people without healthcare, the elderly man up the street, and the young mother next door, are left to get so sick?

We are at a crossroads: Will we make government work for us or will we turn it over to the interests of the wealthy and corporations for good? In 2020, this is not a hypothetical conversation. Our organizing, who we vote into office, and how we make our demands in North Carolina will determine if we fund schools or if we fund prisons, if we raise wages or if we drive more working families into poverty, and it will determine if we pass Medicaid expansion so our neighbors can go to the doctors during the worst health crisis any of us have ever had to live through.

To make these changes we must do more than simply identify the issues– as it turns out, poor and working folks in Cabarrus County already know the issues all too well. Instead, we need to build the power necessary to make change.

For too long, Cabarrus County has neglected to take action on important issues that impact poor and working folks simply because elected officials have not been held accountable to us. But if we build power, we can change that. Building power at Down Home means doing the on-the-ground work to care for our community while also helping move real people who represent us into local decision making seats.

Cabarrus County has to work for everyone: There is no other choice. Currently, nearly 30% of all residents here are low-income, meaning no matter how hard you try, it’s almost as likely as not that you won’t ever be able to achieve the “American Dream.” By anyone’s count, that’s upside down and means that the problems here are systemic, not personal. Poor and working folks– nearly half the people living here– need to have a voice in local politics.

Down Home Cabarrus is built by people who live here. Some of us have been here a long time, raising families and carrying on the legacies of generations. Others of us are newcomers, and have heartily chosen Cabarrus county as our home.

We are purposefully and intentionally multiracial: We know that the long legacy of North Carolina’s dog whistle politics are designed to divide us and prevent us from coming together to build a powerful and challenging force. Just a week before we launched our chapter here in Cabarrus County, this coded doublespeak was on full display when our own Republican Rep. Larry Pittman said “this is war” as he described Black Lives Matter protestors as “ignorant thugs,” “criminals,” “domestic terrorists” and “vermin.” If they resist, he said police should “shoot them.”

Unlike Pittman, we aren’t at war with our neighbors in Cabarrus County. On the contrary, we are finding that we have a lot in common, whether we are Black or white, living in Locust or Kannapolis, old or young.

Down Home Cabarrus is going to take our cues from the elderly woman at the food pantry: We are going to rally our neighbors and organize.
Learn more about Down Home Cabarrus and our organizing by contacting Jasmine at [email protected]