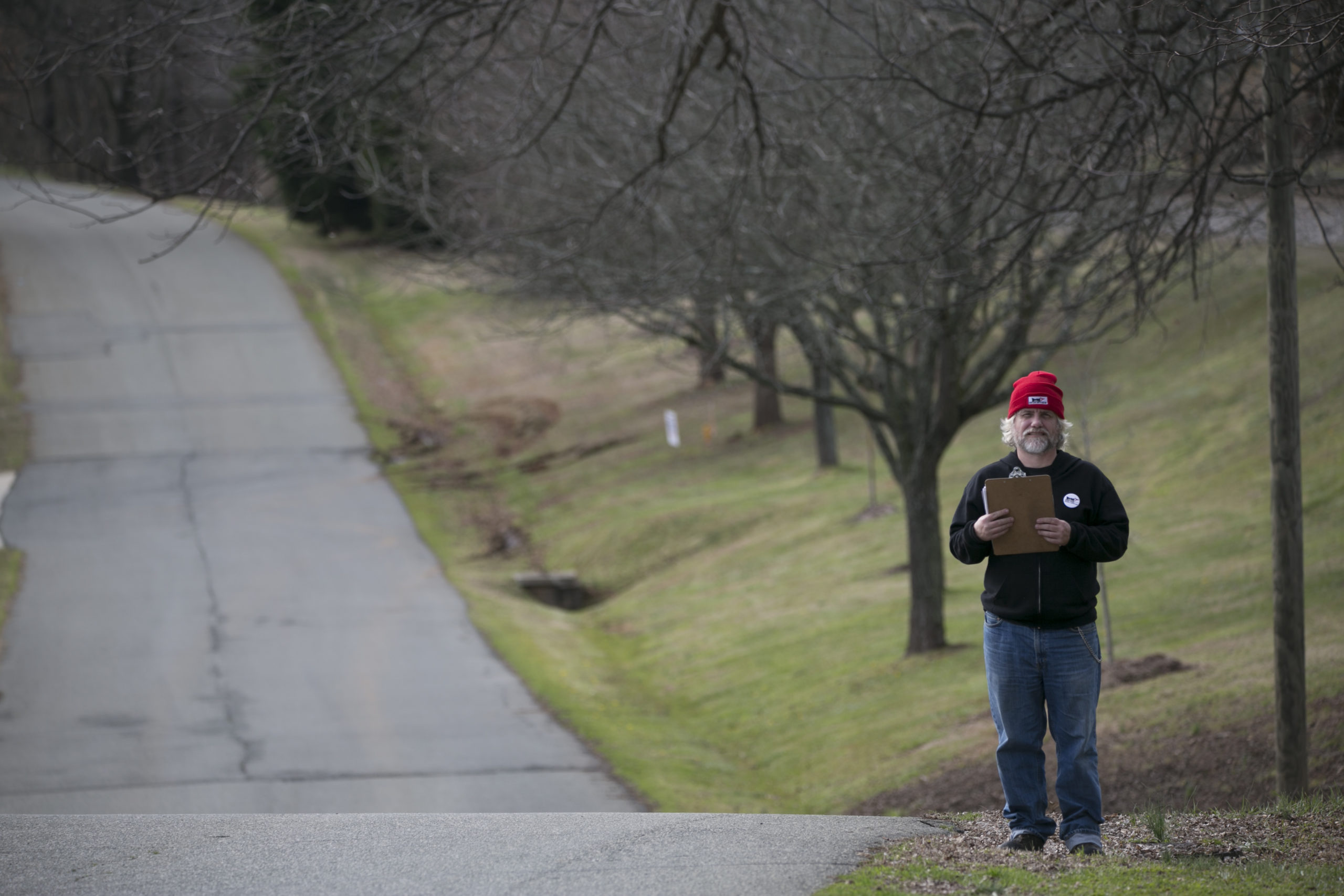 A reflection on going door to door with Down Home by Dan Bayer.

“These candidates are Democrats, right?”

I’m not surprised at the man’s question; I’ve heard it before from several people in the black neighborhoods that I’m canvassing in. The candidates for county commissioner are two progressive women, one of them black, but I fit the media stereotype of a Trump supporter: White, male and middle-aged, speaking with a slight southern accent. I assure him that I’m certainly not out shilling for anyone who might be associated with that kind of ideology.

“Yep, they’re in the Democratic primary.” I emphasize what we at Down Home call the “race/class narrative;” the all-too familiar way that politicians and their wealthy backers use race, religion, and other differences to stoke fear and divide people, preventing the working class from speaking out with one voice about the issues that affect us.

“Yes, they certainly do that,” he agrees. I ask him if we can rely on him to vote for the candidates, Dreama Caldwell and Kristen Powers.

“If they stand for what you say they do, yeah.”

I thank him and return to my car – or rather, my housemate’s car. Mine broke down on a road trip with my band and now resides in a junkyard in Savannah, Georgia. While my partner and I are sharing her car until I can get another one, on days when she needs it my housemate has been loaning me hers. Without either of them, my part in this operation would be impossible.

In contrast to our previous canvassing project – seeking out conservative voters to have conversations about their views on undocumented immigrants and universal healthcare – this canvass feels relatively easy. For one,I haven’t seen nearly as many Trump/Pence flags as I did on the previous canvass, which always leave me feeling nervous. Two, people in Alamance County generally are itching for a change, and voting for progressive women seems appealing.

However, at one door I do run into a rather cynical fellow who worked on the McGovern campaign in 1972.

“Heartbreaking,” he replies. I figure he’s earned his cynicism.

Most of my interactions are pleasant, but as a white man canvassing in largely black communities, I can’t escape the weight of our nation’s racial history. When I approach a group of older black men standing around a fire in the yard of a house, they regard me warily.

“I’m with Down Home North Carolina, a community organization. Is so-and-so home?”

“Uh, he might be in the house. We’re, uh, just taking a break, We work over there.” The man points in a vague direction across a nearby field. I thank him and go to knock on the door, wondering what it must feel like to have to justify your presence in your own neighborhood to any random white guy who walks up to you.

I tell myself that these kinds of power imbalances are what Down Home is trying to dismantle. Some people seem surprised at someone knocking on their door wanting to talk about race and class; it’s not a message that many organizations have used, particularly in rural areas. Too many white people I talk to seem mostly disinterested in it, or even in discussing issues such as criminal justice reform or fully funded schools. I want to change that.

“I don’t like to talk about politics,” says one elderly white woman when I ask her if she supports more funding for public schools. It’s strange that the idea of educating children is “political,” but I know that the role of government and collective social action has been weaponized as part of the very “divide and conquer” strategy that the race/class narrative seeks to address. I guess that’s one of the benefits of being white; issues that to you may seem beneath discussion can be matters of life and death for others.

On election day, both Dreama and Kristen make it through the primary. As we sit around the Down Home office celebrating, talk shifts to the emerging coronavirus threat. Within a week Down Home will have suspended future canvass operations as the pandemic takes a relentless hold on American society. Many of the issues that we’ve been talking about at people’s doors – universal healthcare, a living wage, paid time off – are taking  on a new and frightening significance as ideas once dismissed as “socialist” now seem increasingly more like mere common sense.

As I sit here at home self-isolating, I hope that this pandemic will lead to major structural changes in our economy and society. Concepts that only a few weeks ago seemed alien to the American experience, such as universal basic income, are now discussed daily in the halls of power by liberals and conservatives alike. This change may feel surprising to some or seem like a singular reaction to a very specific circumstance, but if it wasn’t for those out going door to door, having deep and sometimes hard conversations, organizing and demanding a better, fairer society, those ideas wouldn’t have gained the foothold necessary to be taken seriously at this moment.