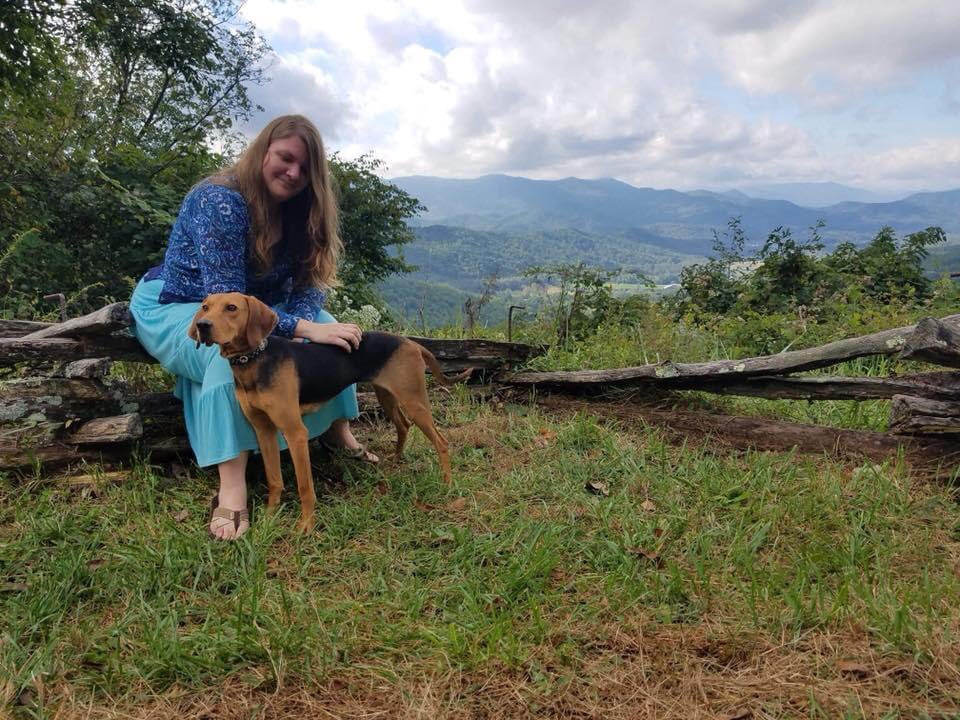 Amanda: I live in Franklin, NC. I lived here as a small child, my dad’s family is from here. My dad’s family were among the first European settlers in the WNC area. Some of us were relocated from what is now the Great Smoky Mountains National Park. I feel tied to this land. In terms of political geography, I was raised mostly in Georgia, but in terms of cultural and physical geography, I’ve spent almost my entire life in rural southern Appalachia.

I left a few times in my adult life for work– I landed good jobs in Texas and Florida and made good money. But I always felt “other” in these places and came home. Unfortunately, jobs here just don’t pay decent wages even in the same line of work. It’s been hard. Small town North Carolina isn’t like Mayberry– It’s actually a huge struggle.

Down Home: You recently started a small business?

Amanda: Yes, I recently opened an upscale dog grooming and training business. I bought the tools piece by piece over the last decade; I have over $6k worth of tools and equipment. It’s been a long and hard struggle.

My work and my business mean everything to me. I have been obsessed with dogs, truly obsessed, since I was around 3 or 4. I’ve spent my entire life learning everything I can about the care, training, and management of dogs. I am so happy to do it my own way. I have spent 20-40 hours a week, on average, on continuing education, for as long as I can remember. It took a lot of work and I finally got it all together to launch my own business. I have big plans.

Down Home: How has COVID-19 impacted you?

Amanda: I love working as a dog groomer and trainer. I want everyone to be able to enjoy their dogs as much as I do. I feel as though I had just gotten my business up off the ground when this social and economic crisis happened.

It started with a lot of cancellations beginning mid-March. Most of the cancellations were due to my client’s financial uncertainty.

I had to close my business on March 27th. It hurts. I had been doing so well and I made so much money. I loved it! I had never been happier.

I don’t know if I’ll be able to get any real aid to help me and my business through this. I SHOULD. Will I? I sincerely doubt it. I’ll have to reopen if I am going to make it, which I believe I lawfully can do because I can social distance. But I’m afraid to do reopen because I’m high risk to die from COVID-19.

I have a number of serious health issues and a compromised immune system. So, I’m pretty used to taking extra precautions, and I know a lot about how pathogens spread and how to avoid them, from my work with animals and just living with bad health for years anyway. My boyfriend, who is healthy, has been going to the store for us. He takes a shower and we spray his clothes with Lysol and put them in the sun when he’s done. We don’t have a washer or we’d wash them. I’m staying home mostly.

But if I can’t get unemployment insurance, then I will have to reopen my doors for business. That sounds scary to me; it isn’t a good situation for anyone.

Down Home: You said you have applied for unemployment insurance. How has that process been?

Amanda: It’s been miserable. I learned that before the COVID 19 crisis, NC had some of the worst unemployment benefits in the country. A 90% rejection rate, a disgraceful budget surplus, and some of the lowest maximum benefits in the country. It’s obvious that the system is designed to hurt unemployed people. Why else have a surplus? People pay for these benefits. It’s supposed to be a safety net when someone loses a job. The government has been doing a terrible job of fairly distributing these funds. Helping an unemployed person helps our entire state.

I was turned down initially because the state showed I only made about $7k last year. One of my employers was totally omitted; one showed I had only made a little over a grand there when I made far more. That’s the hard part: If you are a worker, you can’t control what gets reported or doesn’t get reported but the consequences are all yours. Filing a dispute about this online was literally impossible even though I tried for several hours a day for several days before breaking down and mailing them the dispute. I sent it certified mail so that they can’t say they didn’t get it.

Down Home: Why do you think that process has been so hard?

Amanda: I think in part, of course, its because the system is entirely overloaded with a record number of people filing. Everyone is having trouble getting through. But I also think it’s about our state’s obsession with who does and does not “deserve” access to basic human rights like eating, having shelter, having medical care, etc. They almost always go on about people who might “take advantage” of a system designed to provide the basics necessary to sustain life to economically challenged people, when Jesus of Nazareth, who they all seem so obsessed with, set a plate at the last supper for Judas Iscariot.

Down Home: What do you think your local government or the state government could do to better respond to this pandemic? If you could say something directly to our lawmakers, what would you say?

Amanda: I’ve actually called my lawmakers. I had a lot to say.

Locally, Franklin mayor Bob Scott and our sheriff Robert Holland are, I think, doing very well, especially Mayor Scott. I think his daily posts and his screen side chats are a comfort to many, and he has been proactive in protecting our community.

State and nationwide though? I’m severely disappointed. This isn’t even a partisan issue. It’s a bipartisan human issue.

What about us? Nothing, yet. As an example, there was a thread on my grooming forum, over 400 groomers from all 50 states, out of work and denied unemployment. Your citizens, your constituents, are out of work and we want our aid and we want it now. We’ve been paying our taxes, paying into social security, we’ve been doing our part. Where are our emergency hospitals? Why is there even a question of running out of tests or running out of medical equipment or ventilators? Why hasn’t the government ordered every single machine and pair of hands capable of working on this issue to work on it? Are we this amazing, wealthy country that’s a good and safe place to live, or are we not?

Do you have a story to share about how COVID-19 is impacting you, your family, or your community? Contact us here.