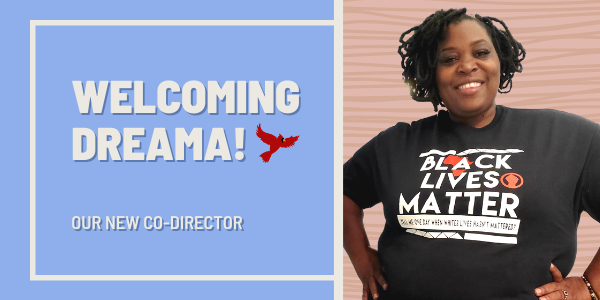 Dreama is a familiar face at Down Home. A member-organizer since 2017, she has been with our Alamance chapter from its earliest days. Dreama is well-known throughout her hometown of Graham because of her years of tireless advocacy for her neighbors– from running diaper drives for families in need to being a reliable, strong shoulder on which folks can lean. Her own interactions with the bail system in Alamance, as well as her bearing witness to the hardships and suffering of those around her, lead Dreama to run for County Commissioner in the 2020 elections– the first Black woman to win in the county’s primary elections.

“The strength of Down Home has been and will always be the membership,” says Brigid Flaherty, Co-Director and Co-Founder of Down Home who is stepping down from her role later this summer. “We built this organization knowing that our success would come from members finding their voice and building their power through the organizing work. It has been a privilege to start this organization and yet my heart is full knowing that Dreama is assuming leadership of Down Home.”

Dreama will take the helm of Down Home alongside Todd Zimmer as Co-Directors. Dreama remembers meeting Todd for coffee in Mebane in 2017  when the country was still reeling from the election and the first racist and dangerous actions of the newly-inaugurated Donald Trump. Later, the two had a long talk in the Down Home NC office so that Dreama could learn more about the organization. “I was looking for something or someone,” she explains, “I didn’t even know what it was I was looking for. But when I found Down Home, I found how to fight back.”

Dreama describes herself as being grounded in the reality of what is going on for so many rural North Carolinians, especially for people of color. She says that she believes she is coming into leadership with the important experiences of “knowing what it is like to be in survival mode” while “Todd brings the big picture thinking and is a visionary.”

“Down Home was founded on the idea that working people should lead the transformation of our communities. Dreama lives and breathes that vision,” says Down Home Co-Founder and Co-Director Todd Zimmer. “Her journey from member, to chapter leader, to candidate for office, to director at Down Home is a deep expression of our mission. I celebrate Dreama’s courage and leadership, and feel blessed to have her as a Co-Director as we continue to build Down Home together.”

Not only has Dreama’s personal and organizing experience prepared her for this role, so has her career. She is the founder of As A Family, a local nonprofit providing basic needs such as clothing, food, and diapers to families experiencing emergencies. Additionally, Dreama has 25 years of experience in education, including 22 years in early childhood education and 20 years in management. She spent the last five years in the hospitality industry, most recently working third shift so that she could campaign for office during the daytime — demonstrating her deep commitment to building power for poor and working folks in rural North Carolina.

“Dreama embodies everything that Down Home stands for,” says Brigid. “I know that this organization will only grow stronger by having a powerful, Black woman at the helm.”

“Brigid was the first person within Down Home NC that recognized my leadership qualities,” says Dreama. “Even when I was just a member she gave me opportunities to speak with funders and learning more about fundraising. I am grateful that she is passing the torch to me to continue the legacy that she and Todd have built here at Down Home.”

Meet Dreama! Join us April 7th at 5 PM!
Love Down Home? Sign up for our news and updates here!